MOHAI is a Catalyst

Promoting the region’s well-being through the exploration of the past, present, and future

The museum is a public place for relevant community conversation that enhances community engagement. By capturing these conversations and developing new collection initiatives, MOHAI is targeting the history that is being made today.

History is not made in a vacuum; it is constantly progressing within communities. In order to both react to and make history, MOHAI imagines exhibits and programs as evolving experiences with an emphasis on local stories and digital components.

Broadening access to history and the museum through programs and exhibits

All people should have access to the stories that make up their history. MOHAI works to develop opportunities for students to experience the museum, as well as ensure that the resources easily accessed for all visitors.

As an esteemed community resource, it is crucial for MOHAI invest in the community. Cultivating long-term relationships and maintaining the highest professional standards ensures the artifacts and stories of Puget Sound’s diverse history are preserved.

By collecting and preserving artifacts and stories of the Puget Sound region’s diverse history, MOHAI highlights our tradition of innovation and imagination. Through compelling exhibits, scholarship, education, public programs, and community engagement, MOHAI bridges the past, present, and future.

MOHAI is treasured locally and respected nationally as a vibrant resource where history inspires people to be their best, individually and collectively.

In January 2020, MOHAI completed the development of our Racial Equity statement and three-year workplan based on a year of staff and board racial equity training. The Racial Equity Statement and Goals were collaboratively created, along with a more in-depth workplan, over several months and reflect the cumulative work of every department. Our workplan will be updated regularly to ensure we are meeting the goals and expectations we have set for ourselves and to be responsive to feedback from our community partners.

Chances are, the software on your computer, the cup of coffee you enjoyed this morning, the jet you flew on your recent flight, the video game you just played, and the online store where you bought nearly everything you need—those fundamental innovations that made your day—all began right here in Seattle. It’s a fact: for 150 years and more, Seattle has been a city on the go, shaping and reshaping the way we live, work and play, and having an outsized impact on the world beyond. MOHAI shares that story.

But why Seattle? What is it about Seattle that makes it so important and unique? Start with the environment: mountains permanently snow-capped; lakes and bays formed by ancient glaciers; forests dense with evergreens; and archipelagos of islands, many of which can be reached only by water or air. The human response to that stunning environment has been a never-ending conflict between stewardship and exploitation, enjoyment and destruction—a push and pull that has important lessons for a world facing profound questions of sustainability.

There also are important lessons to learn from the history of the communities we build. The city’s population is drawn from many nations and enriched by many traditions, all coming together in common cause, but at other times pulling apart in conflicts over race and class. Seattle history sheds light on our increasingly interconnected world. After all, Seattleites traded with Asia long before the term “Pacific Rim” was coined; journeyed north to strike it rich in Canada and Alaska; and eventually did big business with the rest of the world. What does it mean to be a strong community? What does it mean to succeed on the global stage? The answers can be found, in part, in the story of Seattle.

Why Seattle? Because in a constantly changing world, Seattle’s long tradition of inventiveness and ingenuity illuminate what it means to be a place of innovation. Its history exemplifies what it takes to stay on the leading edge, be a community willing to take risks, collaborate across boundaries, and persistently aim for the Next Big Thing.

This is Seattle. And the lessons we can learn from this journey from wilderness to world stage open the window to the larger American journey as well—a story filled with the excitement of new opportunities but tempered by the challenges of constant, often difficult, change. The Seattle story sheds light on our own personal journeys, as well as what our predecessors can teach us about how to build on our history but not be bound by it.

Come and discover Seattle at MOHAI and learn about our community, our world, ourselves. 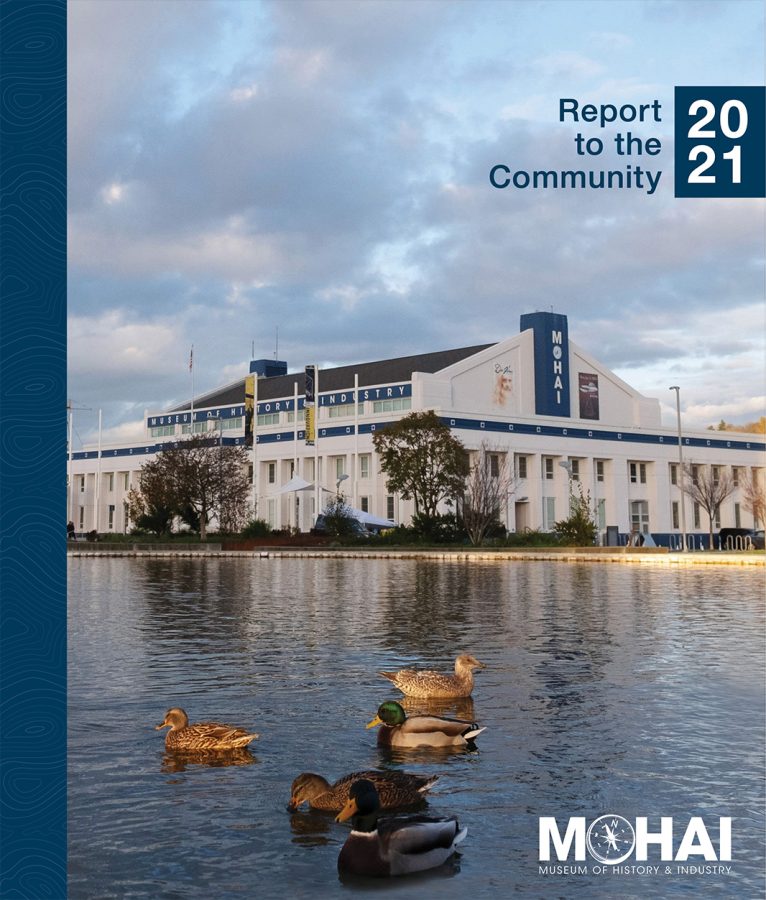 MOHAI is accredited by the American Alliance of Museums and is a Smithsonian Affiliate.

MOHAI has many important community partnerships. Two key affiliate organizations are the Black Heritage Society of Washington State and the Puget Sound Maritime Historical Society, who work with the museum on exhibits, collections, and education programming.

The Black Heritage Society of Washington State, Inc. is a non-profit organization dedicated to the acquisition, preservation, and exhibition of materials relating to the history and culture of African-Americans in the State of Washington.

The Puget Sound Maritime Historical Society is a private, non-profit organization that was founded in 1948 with the ongoing mission of collecting, preserving and interpreting the Pacific Northwest region’s maritime artifacts, monographs, photographs, and other documentary evidence.

Find press information, press kits, as well as other materials and resources for journalists and media.

Photographs in MOHAI’s Collection are available for purchase and can be custom produced according to specific sizes and finishes.

Contact the Marketing and Communications Department for additional inquiries or to be added to the press list.

The Leadership Team, Board of Trustees, and Foundation Board work to ensure that MOHAI remains an outstanding history museum representing the diverse communities of Puget Sound.

As the governing bodies of MOHAI, the Board of Trustees and Foundation Board establish the museum’s strategic direction and oversees financial stewardship. Board members provide expertise for every aspect of the museum’s affairs, and they generously give their time, experience, and financial support.

There are many ways to help MOHAI fulfill its mission of bridging the past and present in order to build a better future.

The MOHAI team of staff, interns, and volunteers are dedicated, thoughtful and talented and help make regional stories come alive for all visitors. By becoming part of the MOHAI community, there are continuous opportunities to learn, experience new things, and for personal growth.

View opportunities at the museum, get involved, and share skills and talents with the MOHAI community!

MOHAI is committed to attracting, developing and retaining a highly qualified, exceptional workforce. The museum staff is a collaborative and diverse team that is dedicated to and passionate about the region’s history and its many communities. The museum is an equal opportunity employer that values authenticity, individual stories, inclusiveness, and innovation. Your interest is appreciated, and applications for available/open positions are welcomed.

When you submit your application, you will receive an automated message noting your materials have been received. Unfortunately, we cannot respond to individual applicants due to the high volume of resumes submitted. No phone calls, please.

Internships are a way to gain professional skills, while working with talented team members at MOHAI. Internship opportunities will be posted as they become available.

Volunteers are crucial in helping MOHAI reach its goals, and their skills and dedication make MOHAI a richer and more vibrant place.

Learn more about volunteering at MOHAI