Get TicketsBecome a Member

Al Young’s World Championship winning 1970 Dodge Challenger drag racing car was donated to MOHAI in 2007 after being raced for over 20 years throughout the Northwest, U.S., and Canada—winning every major Northwest National Event race in its category at least twice.

But there is more to this story. Al Young, who has lived in Seattle since 1966, is the first Asian American race car driver to have ever won a World Championship in auto racing. Growing up in America in the 50’s and 60’s, there were not many Asian motorsports role models to follow. And for good reason—until the 1940’s, Asians were not allowed to own land, intermarry with whites, testify in court, become naturalized citizens, and they were deterred from entering into many profitable mainstream professions. Al Young’s father, graduated from Stanford University with a BA and a Master’s degree in Petroleum Engineering in 1938, and upon receiving his degrees, was instantly hired—sight unseen—by Standard Oil of California. He was informed after working there for almost a year, that he had no future with the company—and was flatly told: “You have no chance for advancement here, no Caucasian man in our company will take direction from a Chinese.”

As did many Asians of their generation, Al and his two sisters were encouraged by their parents to study hard, get a college degree, and enter into professions where they might be more accepted. His older sisters went to Stanford and Mills College. His eldest sister became a microbiologist, and middle sister became a well–known writer and historian of Asian American History. But Al struggled in school because of, at the time, an undiagnosed learning disability we now call: attention deficit hyperactivity disorder (ADHD). Fortunately, his mother encouraged him to do what interested him—working with machines and motors. Al struggled through community college, found ways to deal with his ADHD, and was admitted into the University of Washington and graduated with a BA and an MA in Literature. He now refers to his ADHD as simply being “neuro-diverse.” 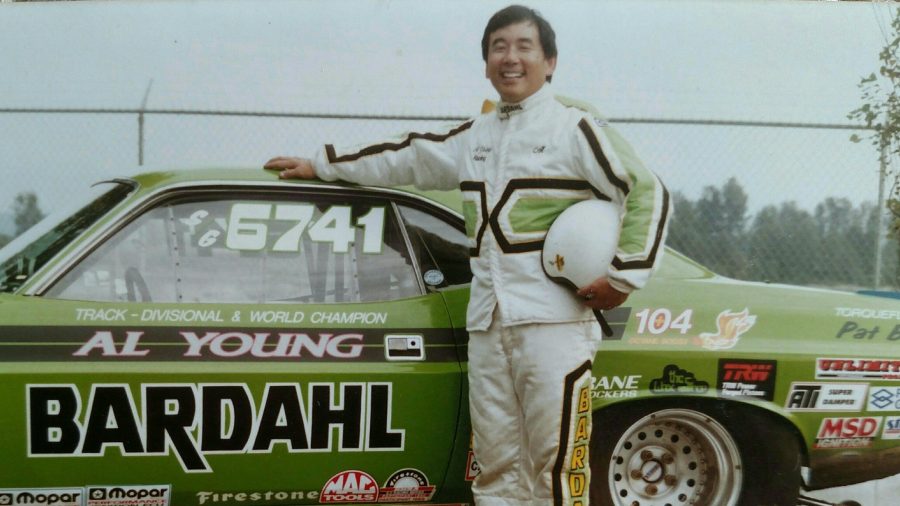 A Career as a Racer and an Educator

Starting in 1976, and to the present, Al Young has been sponsored by the Ballard based, and world famous, Bardahl Corporation. The Bardahl Corporation has sponsored 5 National Gold Cup Hydroplane winning race teams with drivers like Ron Musson, Billy Schumacher, and Rex Manchester, as well as race car greats like Bobby Unser, Dan Gurney, and Carroll Shelby. The founder, Ole Bardahl, an immigrant from Norway, had a reputation for being an innovator and forward thinker. He also sponsored Jerry Mock, who was the first woman to fly solo around the world, and Cheryl Glass, who was the first Black female American professional race car driver in the United States.

During his career, Al Young made friends with some of the most innovative and famous car builders and engine builders in the country. Art Morrison, Al Swindahl, Brad Hadman, Bob Lewis, and Gaines Markley have all worked on the 1970 Dodge Challenger that you see on the main floor of MOHAI.

In 2008, Chrysler Corporation began producing a “Retro” model of the 1970 Dodge Challenger…and 14 years later, they are still producing that retro designed model of a car that Al helped to make famous.